A Jerseyville man was critically injured in a single vehicle accident Monday night in Greene County.

According to Illinois State Police, 56 year old Larry Price was traveling on US 67, south of Woody Road, when he lost control of his 1976 Chevrolet pickup and it left the roadway and rolled over.

Witnesses at the scene reported that the vehicle was all over the road before the crash.

Price was transported to Boyd Memorial Hospital in Carrollton and was immediately airlifted to St. John's Mercy Hospital in Creve Coure for treatment of critcal injuries.

(Litchfield)--The Macoupin Montgomery County Crimestoppers is seeking information regarding a burglary in rural Litchfield. Reportedly within the past week a garage door at a residence in Honey Bend was forced open, and an all terrain vehicle was stolen. The ATV is a blue 2007 Honda Rancher.

Anyone with information is asked to contact the Crimestoppers at 1-800-352-0136, or submit your tip online at macmontcrimestoppers.com.

A Carlinville man has been charged with burglary and arson following an incident Wednesday night in Carlinville.

According to Carlinville Police, on Wednesday at 9:07pm the Carlinville Police Department received a call of a male attempting to set a house on fire. Responding officers discovered the residence at 524 Yard St. unoccupied but having a strong odor of gasoline coming from it. A window was found broken out with blood around it and foot prints were observed inside the residence. After speaking with neighbors a male subject was located matching the description given and held for further investigation.

The Carlinville Fire Department was paged out to assess and ensure the residence was safe. Based on information gathered at the scene, the State Fire Mashall's Office was contacted to conduct an Arson investigation.

Carlinville Police formally charged 44 year old Pierre L. Tandy with one count of Residential Burglary and one count of Arson.

Bond was set at $75,000 and Tandy is currently being held in the Macoupin County Jail.

(Litchfield)--Two people were seriously injured in a head on accident Monday morning on Interstate 55, near Litchfield. According to Illinois State Police, a corvette driven by 64 year old David McKennedy of Litchfield was traveling southbound in the northbound lanes when he struck a vehicle driven by 24 year old William Repking of California. Both individuals were extricated from their vehicles.

McKennedy was airlifted by ARCH helicopter to Memorial Medical Center in Springfield for treatment of serious injuries. Repking was taken by ambulance to St. Francis Hospital for treatment.

Interstate 55 was closed for over an hour due to the accident. McKennedy was cited with improper lane usage. The accident remains under investigation.

A rural Carlinville man has been arrested following the seizure of cannabis plants from his property.

According to Illinois State Police, Thursday at 6:00am the South Central Illinois Drug Task Force, Macoupin County Sheriff's Office and ISP District 18 served a search warrant in rural Macoupin County. The warrant was executed after an investigation by SCIDF.

Fifty-one year old Mark C. Burge, who lives on Standard City Road was arrested for an outstanding warrant and the production of cannabis. Seized during the warrant execution was an outdoor cannabis grow of 224 cultivated Cannabis plants.

More charges are pending according to State Police.

Authorities say outdoor Cannabis cultivation continues to be a problem in the area and anyone who comes across any outdoor or indoor cannabins/marijuana grows should contact the South Central Illinois Drug Task Force.

During the investigation, weapons along with miscellaneous equipment used in cannabis production, and over fifty cannabis plants were seized. An investigation is ongoing by the South Central Illinois Drug Task Force. 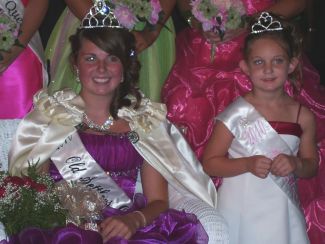 (Effingham)--The suspect involved in a police chase that killed Cowden Police Officer Jeremy Hubbard has agreed to waive extradition. Officials say 31 year old Andrew Davenport will be returned to Illinois within the next ten days to face criminal charges.

Davenport turned himself into authorities in Maryland last week. He is currently charged in Effingham County with aggravated fleeing a police officer. Bond for Davenport has been set at one million dollars.

(Raymond)--During the Raymond Village Board meeting Monday night, the Village Board heard an update regarding well number four in the village. According to Board Member Scott Pinkston, testing showed the well had a casing problem. The Village Board will be looking at locations for a new well, closest to the nearest aquafer. Further discussions is expected.

An update regarding Lancer's Market in Raymond was also given during Monday's meeting. According to Board Member Emily Battin, Lancer's Market will reportedly be sold or closed by the end of September. Battin says the owners business is expanding in other areas, shifting focus away from the Raymond store. She says she has been in contact with the Montgomery County Economic Development Corporation to push the location.

The Raymond Village Board approved a zoning variance during Monday's meeting. According to Village President Dennis Held, the Zoning Board recently approved a variance to store boats on a property on Prairie Street. Board Member Kathy Summers asked the business owners about trimming of weeds and grass on the property, and if they would consider placing a fence around the boats stored outside. The owners promised to keep the property clean, but did not agree on the fence idea proposed.

The Raymond Village Board also heard plans regarding a twenty four hour recycling center in the village. According to Village President Dennis Held, the County is trying to establish the center by next year. There was no mention on where the recycling center will be located. The Village Board wants to make sure that the center will not interfere with an agreement the Village currently has with the Four 4 Organization. No action was taken, pending further review.

Illinois State Police are seeking public assistance in locating the driver of a red Dodge full-size pick-up truck which was involoved in a police chase on Tuesday that resulted in the death of a Cowden Police Officer.

On August 10, at approximately 6:41pm a theft of $100 worth of diesel fuel was reported in Staunton. The male suspect in the incident is described as short and stocky with dark or olive colored skin and dark hair. The diesel pick-up is described as having a raised chassis and oversized wheels with no license plates.

Anyone with information about the suspect or the vehicle is asked to contact State Police at 217-347-2711.

There will be a free soccer camp at the Litchfield Community Center on Saturday, August 21st. The camp is sponsored by Aaron's in Litchfield and by the First National Bank in Litchfield. No advance registration is required. The camp will be conducted by Greg Dunning. Camp for 5th graders and younger will be from 10:00 to noon and camp for 6th graders and older will be from 2:00 to 4:00. The morning session will deal with basic skills with an advanced skills session during the afternoon. Players should have cleats, a ball, shin guards and a water bottle. Parents and coaches are invited.

(Highland)--Two Indiana men are dead following a Monday morning accident of Interstate 70 near Highland. According to Illinois State Police, 52 year old Jerald Jaynes and 23 year old William Burleson were trapped inside their tractor trailer cab when it caught on fire.

Police believe the accident was caused by slowed traffic from an earlier accident on the Interstate. The fatal accident involved three semi trailers and a pick up truck. Two other people were injured in the accident. Their injuries are believed to be minor. The accident remains under investigation.

United Mine workers Local #1393 will meet at the Hillsboro Moose Lodge on Tuesday morning at 9:30am

(Hillsboro)--A third town hall meeting regarding the revitalization of downtown Hillsboro was held Thursday night. During the meeting, City Commissioner Chris Sherer unveiled a Springfield Ordinance that would help with vacant buildings in downtown. Under the ordinance, owners would have to register vacant buildings. Sherer says that a similar ordinance in Hillsboro would help with the current problem in downtown. The ordinance could also be used for homes as well.

An update regarding the historic preservation committee was also given during Thursday's meeting. According to Sherer, Hillsboro Mayor Bill Baran has a list of seven people to serve on the committee. Sherer says the names will be released and possibly passed during the Hillsboro City Council meeting on Tuesday, August 10th. Several in attendance expressed there desire that a mix of downtown business owners be placed on the committee.

Information was also given out regarding the establishment of a TIF District in Hillsboro. According to Montgomery County Coordinator Chris Daniels, Litchfield did most of its recent work from TIF funds. She stressed that the district does take some time to get started, and funds could only be used for infrastructure needs. Commissioner Chris Sherer stated that a TIF District has to expand past the downtown area for it to work in Hillsboro.

An update regarding the Sherman's building in Hillsboro was also given during Thursday's meeting. According to Commissioner Chris Sherer, the city was called over the weekend to the building. Reportedly, window shifting was noticed. The City of Hillsboro blocked several parking spaces, and roped off the sidewalk surrounding the building. Sherer says he is hoping to have something done by Old Settlers. More information is expected during the Hillsboro City Council meeting on August 10th.

(Hillsboro)--A 29 year old Greenville man was sentenced last Friday to ten years in the Department of Corrections. According to the Montgomery County States Attorney's Office, Willard Fletcher pled guilty to conspiracy to commit armed robbery and with possession of a weapon by a felon.

Anyone with information is asked to contact the Crimestoppers at 1-800-352-0136, or submit your tip online at macmontcrimestoppers.com. 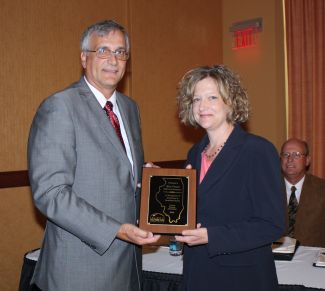 (Springfield)--The Illinois Soybean Association recently honored WSMI Farm Director Rita Frazer with its Excellence in Broadcasting Award during the Annual I.S.A meeting in East Peoria on July 31st. Association Chairman Ron Moore said Frazer is a positive advocate for agriculture in Illinois, and an important link between the agriculture industry and rural communities.