(Hillsboro)--A bicyclist was killed in an accident Thursday evening on the West Frontage Road, a half mile south of the Sangamon-Montgomery County line. According to Illinois State Police, 60 year old Stephen Knipp was riding northbound on the West Frontage Road near Virden Avenue. Reportedly a vehicle driven by 23 year old Shane Neighbors of Girard struck the back of the bicycle, throwing Knipp and the bicycle into a fenced area.

Knipp was declared dead at the scene by Montgomery County Coroner Rick Broaddus. The accident remains under investigation by the Illinois State Police Reconstruction Team.

Springfield Road in the Village of Raymond will be closed Friday July 30, from 8am to 4pm from Rt 127 south to Shirley Street Junction.

(Hillsboro)--The City of Hillsboro is still recovering from heavy rainfall that went through the area Saturday night. According to the City of Hillsboro, the city pool will be closed until further notice. Crews are working on draining, cleaning, and refilling the pool. No time frame has been set on when the pool will reopen.

The City of Hillsboro also announced that Old Hillsboro Lake has reopened. Boaters are encouraged to watch out for debris while on the lake. Glen Shoals Lake currently remains closed until further notice.

(Hamel)--It didn't take long for Madison County Authorities to track down a suspected bank robber. Reportedly, less than ten minutes after a man walked into a Hamel Bank and demanded money, fleeing with an undisclosed amount of cash, a deputy pulled the suspect's vehicle over near Edwardsville.

No one was injured in the robbery. The suspect is being held pending formal charges.

(Belleville)--A November 1st trial date has been scheduled for a man accused of stabbing three people to death in a Belleville hair salon. Darrell Lane is accused of murdering hair dresser Michael Cooney, and sisters Doris Fischer and Dorothy Bone in 2005. The salon was located in Cooney's home in Belleville.

Lane was arrested more than a year after the alleged murders. He has been in the St. Clair County Jail since his arrest. Police believe Lane may not have acted alone, but haven't named any other suspects.

(Springfield)--Several Illinois towns are in recovery mode after a round of severe weather made its way through the area Monday afternoon. Among the worst hit areas was Sullivan in Moultrie County. Several businesses on the town's square were damaged, and much of the town was without power.

Uprooted trees damaged at least two homes in Matoon, and widespread damage was reported to homes and businesses in Taylorville. The storms included wind gusts of up to seventy miles per hour.

Also crowned was seven year old Natalia Deren, the daugher of Sandi Shimcheck and Daniel Deren as 2010 Little Miss Party in the Park. 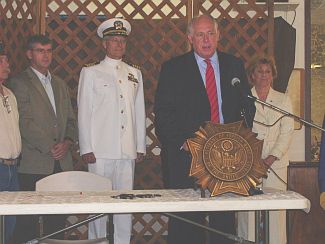 That was Governor Pat Quinn. Both measures go into effect immediately.